Zeta Phi Beta Sorority, Incorporated is fully engaged in planning for its Centennial in 2020. A separate licensing structure is in place for all items bearing the Centennial marks indicated below and for use of all references to the Sorority’s 100 year anniversary in connection with the marks of Zeta Phi Beta Sorority, Incorporated. Examples include, but are not limited to, “Journey to the Centennial,” “Celebrating 100 Years,” “Be Finer in 2020” and “1920-2020.”

USAGE OF THE CENTENNIAL MARKS

Official Centennial marks are not to be used in any form unless approved in writing by the Centennial Commission. This policy also applies to individual members as well as organized groups within the Sorority.

This image in any form is the official Centennial logo. It is not to be reproduced or used in any way without the permission of the Centennial Commission.

This image is the official logo for the Centennial Campaign to generate funds. This campaign will generate marks periodically that market and present the various elements of the campaign. Examples include the dangles for the pins that will be attached and all marks to complement the marketing campaigns. 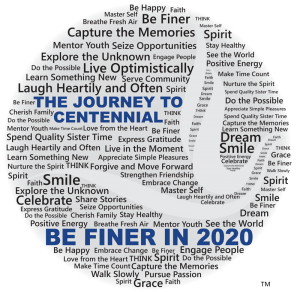